The annual Historic Leyburn Motor Sprints are held every August and commemorate the first Queensland Grand Prix held in Leyburn in 1949. This rural community gears up for approximately 15,000 car lovers visiting over the one August weekend.  The competitions cater for a number of historic classes and for an array of open wheelers.    Shannon’s Show ‘n’ Shine are also held during the weekend with over 150 cars displaying their finery.  The Vintage Caravan competition gives the vintage caravan owners a chance to boast their unique restorations!  More information and entry details can be found at Leyburn Motor Sprints web site. 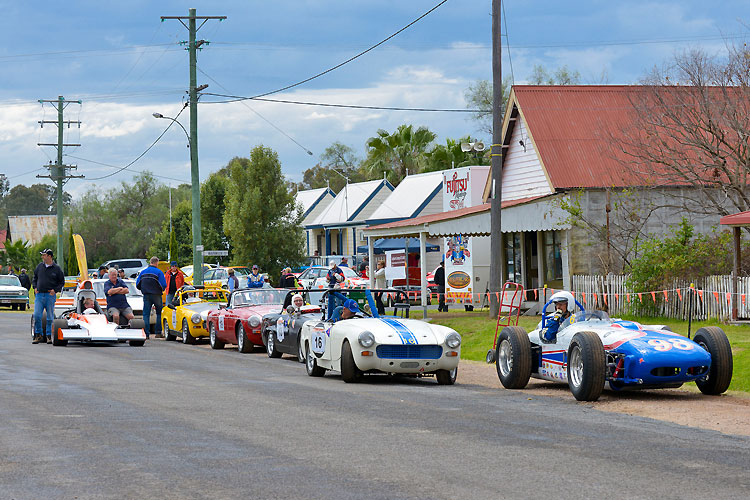 European settlement of the Leyburn area began in the mid 1800’s. Leyburn was originally named ‘Canal Creek’ in the 1840’s by William Gray Sr.  The township was later renamed as Leyburn by Gray’s daughter and son in law, Jane and Henry Kirby.

The town became an important stop along the stock route and became a mail centre in 1852 and hosting the Court of Petty Sessions from 1861. The Post Office was opened in 1861 and the courthouse was constructed in 1867.

During the 1860’s, gold was discovered in nearby Thanes Creek and the town grew to a population larger than Toowoomba’s at that time. By the 1870’s, Leyburn was home to a bustling community and a number of hotels, including the still existing Royal Hotel.  The Gold Rush was brief and at its conclusion, the coaches and later the railway bypassed the town and so it reverted back to a small rural village.

World War II
During 1944 and 1945, Leyburn was home to the RAAF 200 Special Duties Liberator Q Squadrons and US Army Z Special Operations Units. Leyburn Airfield was used for pilots completing missions in Timor, Borneo and New Guinea. Leyburn’s involvement in World War II is marked by a number of monuments and historic parts of the village, including Liberator Park and its memorial and the RSL Museum.

1949 Australian Grand Prix
At the conclusion of the war, the Leyburn Airfield was once again thrust into use, this time as the location for the 1949 Australian Grand Prix. The event was 35 laps of the 6.92km circuit which crossed three different privately held farms.  To commemorate this event, Leyburn hosts the yearly ‘Leyburn Historic Motor Sprints‘.

Renown for his uniquely crafted bar tops found in many pubs across the region, Tony’s talents can be appreciated in the local historic Royal Hotel on your visit.  The Bull & Barley at Cambooya and Rudd’s Pub at Nobby also showcase Tony’s craftsman skills.

Visit his workshop and view his crafted pieces, ranging from custom-made timber signs, outdoor tables and chairs, and even the ultimate bar for your man cave. 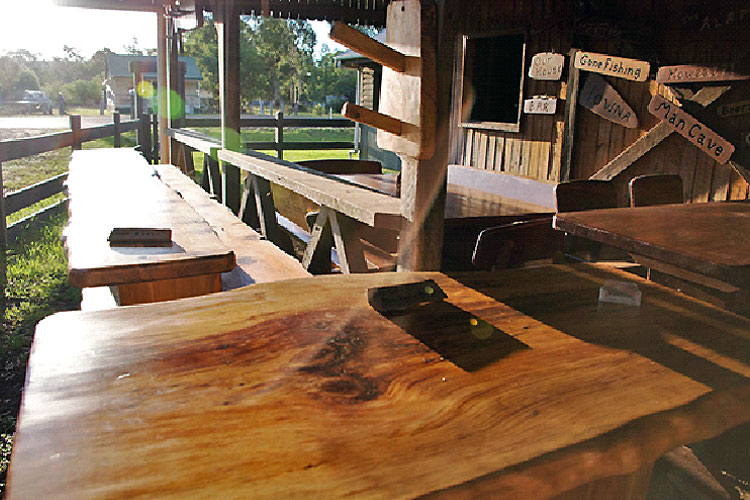 The Royal Hotel is the oldest continually licensed premises in Queensland and the building still today incorporates the original premises constructed in 1863.

James Murray was the first licensee, owner and builder of the Royal. Unfortunately, he held the licence for only six months as he died from the effects of drinking to excess!

Leyburn boomed as a gold mining town and was one of the first settlements on the Darling Downs. After the gold mines in the area closed the town reverted to a rural farming community. The Royal Hotel has an extensive gallery of images of the pub and area during the early days.

Located directly behind the motel, there’s plenty to see and do at the Leyburn RSL.  Offering more than a quiet waterhole, the RSL is an absorbing repository of military history, Sprints history and even some local archaeological treasures.

Some of the interesting facts discovered at the Leyburn RSL:

Enjoy & remember - Great times with us

Relax in the friendly, country atmosphere around Leyburn
CONTACT US
Go to Top